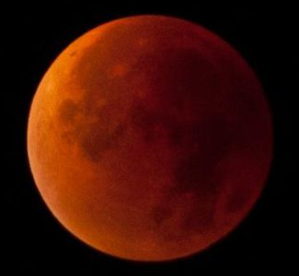 According to the Smithsonian, “The lunar eclipse will be visible across North America, with the best viewing farthest west, according to NASA. Viewers on the East coast will see the start of the eclipse just before dawn, possibly catching the the moon just beginning to take on a reddish hue before it sets. Stargazers further west will see more of the action. The best views will be in Hawaii, Alaska, Australia, and Eastern Asia, where early risers will be able to watch the entire eclipse. If you can’t go out to see it, or clouds obscure your view, NASA TV plans to broadcast the entire event.”

According to the Pioneer Press Skywatch The moon will enter the earth’s shadow at 5:48 a.m. as morning twilight begins. It will be completely in the shadow at 6:51 a.m. Unfortunately, right as the moon makes it to the middle of the Earth’s shadow it will also be setting below the northwest horizon, with the sun rising shortly thereafter in the east.