Is Drug Kingpin Paul Le Roux the Inventor of Bit-Coin? 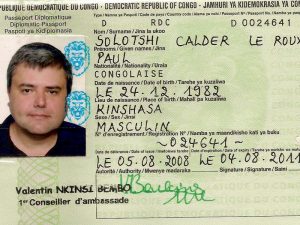 Paul Calder Le Roux, a brilliant South African software programmer who ran the most successful and largely legal opioid marketing networks called RX Limited, and morphed into running a huge illegal international drugs and arms dealing empire that has ever been seen.  Since his arrest in 2012, he has been spending time in the custody of the DEA, ratting out his former associates for better conditions to his incarceration.  The amazing true story of Paul Le Roux has been documented in Evan Ratliff’s exceptional book The Mastermind.  I recommended this book before, and I do so again.  This story reads like a brilliant piece of crime and adventure fiction, yet it is all too true.

I first came across the Le Roux story back in January 2019 in a Smithsonian article, and then read Ratliff’s book.  Le Roux seems to me to be a possible basis for the Raymond Reddington character in one of my favorite TV shows, The Blacklist.

I read a tweet last week from Brian Krebs, who turned me on to a new Wired post by Evan Ratliff,  There is new information that seems to indicate that Paul Le Roux may be the real identity of Satoshi Nakamoto, the alleged inventor of blockchain technology and Bit Coin.  Many have claimed to be the real Nakamoto, but none have stood up to scrutiny.  But Paul Le Roux definitely had the skills required to code blockchain and create Bit Coin.  In the image above, the name on Paul Le Roux’s fake Congolese diplomatic passport is “Solotshi,” which seems similar to Satoshi.

It is a known fact that Le Roux created a brilliant piece of encryption called E4M in 1999, and there is evidence that he was involved in the creation of the more well-known True-Crypt.

Ratliff says that “The creation of bitcoin mirrored this approach. Satoshi appears to have worked on the project for years before emerging out of the ether to announce it on the Cryptography mailing list in October 2008, with his now famous white paper. He then released the software on an accompanying web site, bitcoin.org, and spent years patiently answering technical questions and taking suggestions.”

The Wired article looks deeply into the evidence that seems to suggest that Le Roux is Satoshi.  Ratliff also explores all the reasons that Le Roux is not likely to be Satoshi.  At the end, he cannot find the one definitive connecting piece of hard evidence that proves the issue, one way or another, and as a professional journalist, he cannot say definitively that Le Roux is Satoshi, so he leaves the question unanswered.  His article is titled “Was Bitcoin Created by This International Drug Dealer? Maybe!” and the maybe says it all.  But then there’s that exclamation point that seems to lean toward “maybe yes.”

As a blogger, I am not under the same constraints of proof as a journalist, and it is ANOTHER great yarn.  So much evidence suggests that Le Roux is Satoshi, so for me, well, let’s just say I hope to be reading the sequel book to the Le Roux saga soon.

Le Roux was arrested on September 26, 2012 by Liberian police and handled over the the DEA.  He immediately pleaded guilty to a proffer agreement with the DEA for conspiracy to import narcotics into the US and violation of the Food, Drug and Cosmetic Act..  He has been cooperating with the DEA to scoop up the remaining players in his empire, in exchange for immunity from prosecution from some of his crimes and a reduced sentence for others.  He is scheduled to be sentenced, finally, in 2019.  The current stash of 1 million Satoshi-mined Bit-Coins, worth $12 million at the time of his arrest, are worth $10 billion today.  No one has ever added to or withdrawn from this stash.

Check out Ratliff’s Wired article, it’s worth the read.

My Interview with a High School Senior – Part 2

The second of two parts.   If you missed the first part it is here.  Are you thinking about a career in cybersecurity?  R...

My Interview with a High School Senior – Part 1

The first of two parts.   Are you thinking about a career in cybersecurity?  Read on.  Know a high-schooler who is consid...

When this all started, I was encouraged by all the caring, reaching out, and sharing on social networks and in real life..  ...

A quick Saturday digest of cybersecurity news articles from other sources. FBI Releases Guidance on Defending Against ...

Guest Post – Cyber-bullying: A Rising Problem in the Internet Space

The internet comes with plenty of possibilities. As robust as the opportunities are, so are some of the negatives that accomp...

How Secure is Your Tech Support Company?

Is your computer technology Managed Service Provider (MSP) the weakest link in your supply chain security program?  Are they...