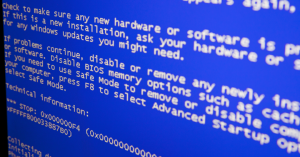 Naked Security recently reported on a new ransomware exploit that looks like the infamous Windows Blue Screen of Death (BSOD).  The tactic this time is to trick you into calling a toll-free number for “support.”  This is another variation of the “Fake Tech Support” scam that we have written about numerous times.

The lock screen feature is similar to the “FBI Warning” losck screen exploit of the past, but instead displays the a facsimile of the Blue Screen of Death.

In addition to displaying the blue screen, this malware exploit freezes your mouse, and disables the Task Manager.  There is also a pop-up message that asks you to call a toll-free number for help.  The helpers will charge a fee to “fix” your computer.

Your mom told you not to talk to strangers, and this applies here.  Your options include booting into Safe Mode and using Windows Defender or System Restore to roll back your computer to remove the malware.  If that fails to work, then you should be calling your regular computer support professional, whether on staff, or through your computer support company.