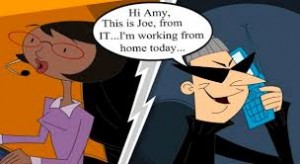 Social engineers have many tricks up their sleeves, and we have covered many of them in previous articles.  The biggest trick is phishing emails, of course, coupled with replica landing pages on hijacked websites.  Other methods include phone calls, such as fake tech support calls.  There are texting hoaxes, called smishing.  There are fake, cloned, or hijacked Facebook, LinkedIn, Twitter, and Instagram account exploits.  Your social engineer may appear in person, too.

One sure sign that you may be getting played in a social engineering exploit is that there is a significant change in your emotional state.  Most of the time, most of us are operating in an emotional state that is neutral, or natural.  Neither too happy or too sad, not too excited or bored.  Nice and safe and in the middle.  If you are reading an email, a text, or a post, or having a phone conversation and your emotional state suddenly changes, you are probably being manipulated by a social engineer.  In fact, social engineers and other con artists count on using your emotions to motivate you to do something that is unwise, or not in your best interest.

So pay attention to your emotional state during the day.  Some of the emotions that are commonly used by social engineers are:

Be aware that most of these scams rely on more than one emotion, they may be playing with two or more emotions in order to set the hook more deeply.  So if an email arrives or a phone call comes in that causes a dramatic change in your emotional state it should be a red flag.  Step back, disengage or hang up the phone, take a deep breath, and think about this for a few minutes.  Involve a family member or coworker, see what they think.  Check it out a bit.  Is this real or not?  In a business setting, you should report these exploits to your IT department.  No matter what, give yourself time to consider whether you are being set up by a social engineer.