HomeWyzGuys Tech TalkWyzGuys Believes in a Free and Open Internet

WyzGuys Believes in a Free and Open Internet

We support the principles of the recently launched Declaration of Internet Freedom.  A large number of companies and organizations have joined together to support and promote the principles of an open Internet.  The Internet has been under attack from our own government, other governments, and entrenched interests of old line companies who have paid for the kinds of political access that the average internet user can never afford.  We believe the Internet is an incredible force driving the global economy to a more open, more free, more productive and wealthier world.  We believe the Internet levels the playing field in such a way that anyone can prosper, not just the old oligarchies and power bases.  And this is why those forces have arrayed themselves against a free and open Internet, and tried to get SOPA and PIPA and ACTA, and other restricted regulatory acts passed in Congress and internationally.

We are joining an international movement to defend our freedoms because we believe that they are worth fighting for.

Let’s discuss these principles — agree or disagree with them, debate them, translate them, make them your own and broaden the discussion with your community — as only the Internet can make possible.

Join us in keeping the Internet free and open.

We join with the Electronic Frontier Foundation, Access, and Free Press.  You can read more at TechDirt Daily. 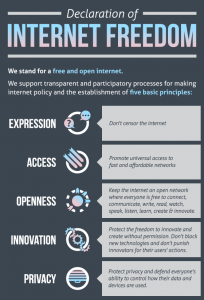