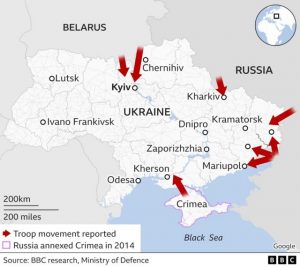 Remember NotPetya?  This was a campaign by the Sandworm APT in Russia the last time Russia invaded the Ukraine.  It deleted hard drives around the world before it was through.  There is a new variant call the HermeticWiper being deployed against Ukrainian business targets that has the same danger of spilling over into the rest of the world.  Here are a couple of articles to check out.

Leading up to Russia’s unprovoked attack against Ukraine, threat actors deployed destructive malware against organizations in Ukraine to destroy computer systems and render them inoperable.

The war in Ukraine increases the risk of wiper malware to spill over. I’m sure you remember NotPetya, which caused billions of dollars of downtime damage. The WSJ reports that Symantec observed wiper malware was put in motion just hours before Russian tanks arrived in Ukraine.

The WSJ said: “The wiper malware—this version is being called HermeticWiper by researchers—could mark an escalation in cyberattacks against various Ukrainian targets, security experts said. Websites of government agencies and banks were disrupted on Wednesday, and on Thursday, that of the Kyiv Post, an English-language newspaper.”

“On Wednesday, Slovakia-based cyber firm ESET said it also detected the wiper strain on hundreds of machines in Ukraine, adding that timestamps indicated the malware had been created nearly two months ago in preparation for deployment.”

The WSJ noted that “On Thursday morning, CISA Director Jen Easterly tweeted a Wired magazine article on the 2017 NotPetya hack, which emanated from a Ukrainian accounting firm and caused billions in lost sales and other damage to businesses including FedEx Corp. and Merck & Co. Inc.”

“While there are no specific threats to the U.S. at this time, all orgs must be prepared for cyberattacks, whether targeted or not,” Ms. Easterly wrote.

So, we strongly recommend to:

And it pains me to say, that while you are at it, warn your users: Criminals will start new, devious charity campaigns that claim to help people in Ukraine. Remind your users to –only– use legit charities they are already familiar with and to never click on a link in an email of a charity claiming to help Ukraine war victims.