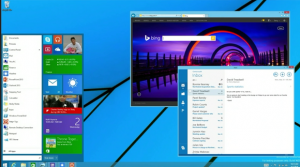 The picture above is supposed to be how the new user interface of Windows 9 is going to look.  Gratefully, it looks like Microsoft has finally realized the colossal blunder it made when it removed the Start Menu in Windows 8 and 8.1.  To me it looks like the right column has been absorbed by the Start Screen apps, which is not my favorite solution, I would rather have the tradition right column items.  Perhaps they will let us go back a version, as they have since Windows 2000.  I still have clients rocking the Windows 95/98 single column start menu, on Windows 7 systems.  Perhaps they will be able to retain that look.  For me, the pinnacle of operating system form and functionality is Windows 7, at least for now.
The other rumor that keeps rumbling out of Redmond is that Windows 9 will allow for Virtual Desktops for the first time.  This is a feature that has been available in both Linux Ubuntu and Apple OSX.  Basically virtual desktops allow you to create multiple user environments for the different uses you put your computer through, such as having one look for work, and another for your personal life.  Or something distraction free for focusing on writing or web design.  Or a gaming desktop, or one for watching videos or online TV.
Those of us in the business usually have access to a beta that we can play around with, but that has not been released as yet, so all we have are for now are rumors based on statements coming out of Redmond and the few public presentations that Microsoft has but on at trade events.
All I can say is stay tuned, we will be featuring more information about Windows 9 as it becomes available.