This is the second of a three-part series of articles about TOR.  On Monday we took a look at the surprising origins of the TOR network.  Today we will be taking a look at how TOR works.

To use TOR, a person just needs to go to The TOR Project , and download an install the TOR web browser. Then it makes sense to read the TOR warning document. The rules include:

Your online session will be routed through the TOR network of over 6000 relays. Your TOR browser establishes a TLS encrypted link to a TOR entry node. Then data packets including the originating IP address are encrypted multiple times (multi-layered encryption, like an Onion – get it?) then the traffic is sent through a number of TOR relay nodes. Each relay node removes one layer of encryption, and forwards the data packets to the next relay in the virtual circuit. TOR also allows packet streams to be multiplexed, so that packets in a single session may be routed over different sets of relays, further anonymizing the session. The data packets final reach a TOR exit node, where the last layer of encryption is removed, and the data is sent to its destination. 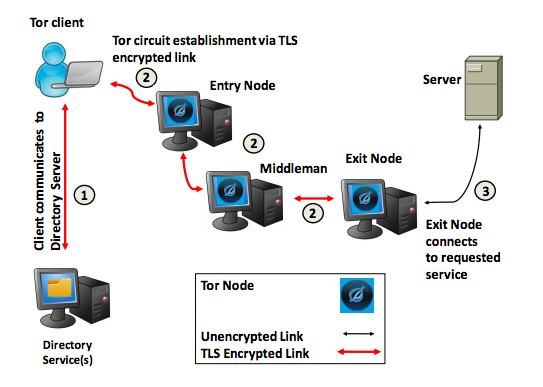 Herein lies one of the exploitable weaknesses of TOR. Traffic leaving the exit node is UNENCRYPTED. The originating IP address is still concealed, but the contents of the session are available in plain text. If an exit node is compromised, or perhaps created by a government agency and added to the TOR network, all TOR traffic leaving this exit node is susceptible to surveillance. In fact, in July 2014, the TOR project detected just such a group of relays and removed them from the TOR network. This would have coincided with the time frame of the FBI’s “Operation Onymous” (not anONYMOUS any longer) which took down Silk Road.

But we are ahead of ourself. For the most part, communications over the TOR network is still the most secure way to communicate over the Internet, beating out other anonymizer services and VPNs (virtual private networks).  On Friday we will take a look at some of the recently uncovered weaknesses of the TOR network.