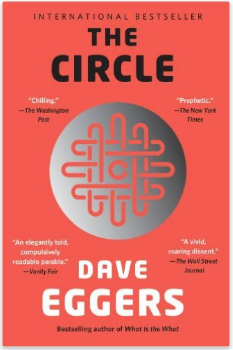 I recently read Dave Eggers book The Circle at the recommendation of a friend in the cybersecurity profession.  While I don’t do book reviews in this blog very often, I thought I would throw in my two cents about this book.

I was recommended this book during a cybersecurity training class. I do want to say that this book looks unblinkingly at some real issues that ought to concern all of us who are active online with Google, Facebook, and the like.

This book is in the same Utopian stream as George Orwell’s Animal Farm, and 1984. Very strong comparisons can be made to Aldous Huxley’s Brave New World. Even a little shout out to Ray Bradbury’s Fahrenheit 451. A grimly dark look at the gentle but slippery slope we are sliding on, into a brave new tyranny.

A major player in the online world, The Circle is a company that seems amazingly similar to Google.  Or maybe an amalgamation of Google and Facebook.  The story follows the experiences of a new employee as she works her way up the ladder at The Circle.  The are creepy, dark undertones right from the beginning, but what we are shown is how easy it is for a group or even a nation to be lured into a world that is increasingly controlled by a single, but “beneficent” corporate overlord.  In ways, very reminiscent of the ways the Nazi Party sucked 80 million Germans in to the hell that was the Third Reich and the Holocaust.

How about a future where privacy is considered anti-social behavior equal to theft?  Or where keeping a secret is considered to be the same as lying.  Where children are given a tracking chip at birth?  Where the community of Circle users helps to install surveillance cameras nearly everywhere?  Where you can agree to become “clear” and have your every move or word recorded for posterity and available online to anyone?  Where a company works to take over running elections, and through them, the government?

What makes this book compelling is the way that our current reality, events and inventions and technological advances, are actually on track to create a future just like the one described in The Circle.

A word of warning.  I did not enjoy this book as much as I might have. The female protagonist was difficult for me to get interested in. She spent a lot of time crying, for example. All the emotional stuff seemed pretty spot on realistic, but being a guy I can only say she seemed like girl’s I’ve known. The romantic/sexual story arc was kind of weird – three boyfriends – the schlubby ex, the coworker with poor control, the mysterious guy who takes her in the can. I was looking for suspense, but what I got was romance.  The main story line – scary omnivorous Internet company takes over the world – took too long to unfold. And the end was sadly anticlimactic.

This book looks at an important issue for our time, but did it in a way that didn’t engage me as strongly as I would have liked.   That was my experience, anyway.  But lets not forget that I find technical manuals interesting.  So yours may be better.