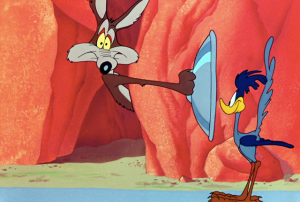 Thanks to Joe Soucheray and his radio show’ “Garage Logic” I learned that animator Chuck Jones of Looney Tunes fame had rules for this staff to follow when creating the story arc for a Road Runner cartoon.  Back in the day, when there were only 3 broadcast networks, a public broadcast network, and maybe an independent local channel, (that’s right kiddies – only 5 TV channels!), before UHF even, I spent my Saturday mornings immersed in cartoons.  Hanna Barbera gave us The Flintstones, Huckleberry Hound, Quickdraw McGraw, and Augie Doggie and Doggie Daddy.  Jay Ward gave us Rocky and Bullwinkle and Mr. Peabody and Sherman.  And Chuck Jones and Looney Tunes gave us Bugs Bunny, Daffy Duck, Elmer Fudd, and The Roadrunner and his nemesis Wile E Coyote. The Roadrunner was one of my very favorite cartoons, in spite of the fact that they were all pretty much the same.  Pure slapstick, it was always funny to watch the Coyote try some new method to catch and eat the Roadrunner.  LMAO is exactly what happened when I watched Roadrunner cartoons.  Still happens when I can find them.

As it turns out, there was a reason for the consistency of both the Roadrunner plot lines, and the gags that made it so funny.  There were rules.  The Rules for Roadrunner Cartoons are listed below: 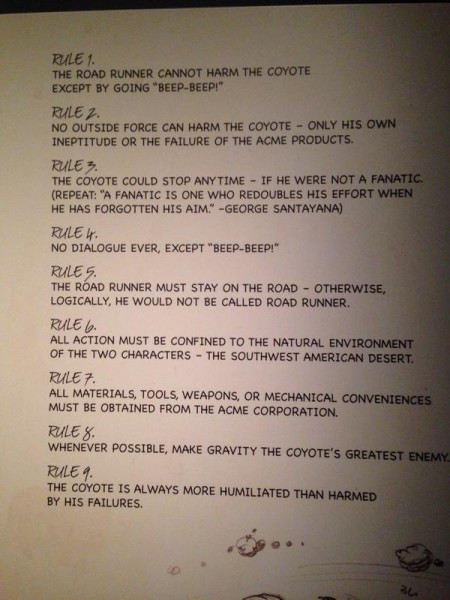 1. The Road Runner cannot harm the Coyote except by going “meep, meep.”

2. No outside force can harm the Coyote — only his own ineptitude or the failure of Acme products. Trains and trucks were the exception from time to time.

3. The Coyote could stop anytime — if he were not a fanatic.

4. No dialogue ever, except “meep, meep” and yowling in pain.

5. The Road Runner must stay on the road — for no other reason than that he’s a roadrunner.

6. All action must be confined to the natural environment of the two characters — the southwest American desert.

7. All tools, weapons, or mechanical conveniences must be obtained from the Acme Corporation.

9. The Coyote is always more humiliated than harmed by his failures.

10. The audience’s sympathy must remain with the Coyote.

11. The Coyote is not allowed to catch or eat the Road Runner.

Go ahead and click through the links and remind yourself of all the great Saturday morning cartoons.  I think I might just have to do a bit of shopping on Amazon.