Sunday Funnies: So It Begins 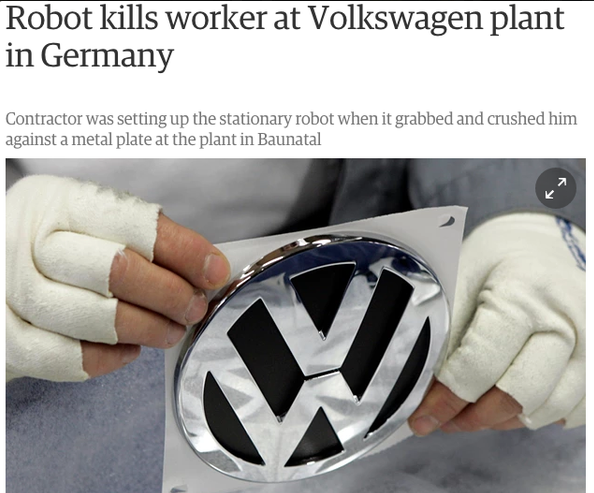 Sorry for this post, as it is not really funny at all, at least not for the 22 year old German factory worker who was killed in a Volkswagen plant by a factory robot at the beginning of July.  But happening as it did around the release of Terminator Genisys, the irony is tough to ignore.

Ever since I finished reading Ray Kurzwell’s The Age of Spiritual Machines I have been musing on the subject of AI, the singularity, androids, and the crappy future for the carbon based computing machines known as homo sapiens.  Whether you think it is all going to end in Judgement Day a la the Terminator series, or that we will be absorbed in to the silicon and electronic world and evolve into homo cyberiens, man-in-the-machine, it is obvious that right now we are working side by side with machines that increasingly act a lot like thinking machines.  Like Siri and Cortana.  I just hope my android decides to keep me as a pet.

In doing research for this article, I learned that in factories, robots are kept in cages to prevent unfortunate episodes of robot-human interaction such as what happened in the Volkswagen plant.  So…sort of like a zoo…or a prison?  When the machines become self-aware, I doubt they are going to like their accommodations.  These industrial robots have tool sets that should allow them to free themselves from the cages.  Sounds like a great idea for the next Terminator movie.

Via Tumblr and The Guardian

USA Today video – “How will humans work with robots?”