Sunday Funnies: Rage Against The Machine 2 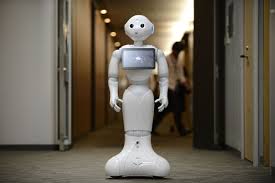 What is going on?  Here is another story of human on android violence.  I have to admit, I find this stuff disturbing.  I am sure most people just see an object, a thing, and that this sort of violence is no different from throwing your golf club into the lake during a particularly frustrating round of golf.  But for me, this is just kind of painful to hear.  Many of my closest friends are computers.

I originally read about this on Silicon Beat.  You can also read more on Sophos.

“In the latest example of a human taking out its frustration on a robot, an inebriated 60-year-old named Kiichi Ishikawa was so fed up with a non-robotic clerk at the telecommunications and mobile-phone outlet that he kicked poor Pepper, according to the authorities. And he kicked him so hard that Pepper now moves slower, possibly from a broken internal computer, or possibly from a broken heart.”

Both stories also mentioned the case of a man who kicked a robot dog as part of a demonstration showing the stability of the robot-dog in question.  This activity still got him into trouble with PETA.  And the demise of Hitchbot, reported here last month.

Many of us will live long enough to see androids with some sort of self-and-social awareness, and I suspect that they may be accorded legal status and rights at some point.  Maybe some future county clerk with be jailed for contempt of court after failing to give a robot couple a marriage license.  In any event, let’s take it easy on our electronic buddies.  Sure, they are not as smart as your dog (yet), but they can be trained easier, and never pee on the rug.