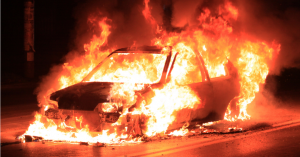 I am a regular listener and fan of Joe Soucheray’s Garage Logic radio show.  One of the persistent themes on the show is the “Samer Therory.”  Joe explains:

“Samer, as it was explained to me, was a guy in the military back in the 1970s. He worked in the communications field. He posited then, and it seems to be coming true, that because of all the microwaves in the air, people are going nuts.”

We have reported here previously about various attacks on technology, from the guy who shot his Dell computer in an alley, to attacks on the Hitchbot and Pepper robots.  The most recent incident is the man who torched a Google Street View car because he was convinced Google was spying on him.  Of course he is right, just not this way.

But maybe all this apparent neo-luddite-ism is really evidence of the effects suggested by the Samer Theory?

The Samer Theory is a bit on an Internet meme.  Here are some other comments about it.

From the Rocketry Forum – “Essentially the Samer Theory is that radiation from electronic devices are slowly cooking our brains and making us nuts. The theory is used to explain the crazy stuff that people are doing now days and is brought up from time to time on Garage Logic.  To listen to more of the wisdom from Joe Soucheray, go to his show archives here.  It makes good listening while doing various rocket related activities.”

And from Expediters Online – “Samer theory?

“Many of the studies that have proved that putting tinfoil on your head to protect you brain from cell phone radiation is useless and not friendly to the environment (all that tin foil being used). The only problem is many of the studies are paid for by the cell phone companies and carriers. The best study was done in Norway where everyone, including new born children, has a phone which proved that no one really cares as long as they can talk on phone while not interfering with their tin foil hats.

“The other day I was at the hospital with my wife and there was a sign that said “do not use your cell phone because it interferes with hospital equipment” so I sat there and watched all these nurses and doctors use their wireless note pads (they want to impress the patients) and their cell phones so I pulled mine out and called my dad. All of a sudden I had two nurses yelling at me to turn off my phone and I countered loudly that the doctors are using theirs, what’s the difference? One of the nurses said they are special phones but they are not. Later on I asked the doc who was treating my wife to see his phone, amazingly it was the same one my father has and he bought it at the same place my father did and then as he walked out the room, he opened it and started to make a call. Amazing.”

So maybe the technology is making us all crazy by baking our brains with radio waves?