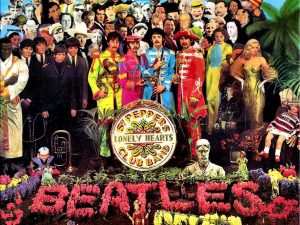 In February 1963, Dick Biondi, a popular nighttime disc jockey (DJ) at WLS-AM in Chicago, dropped the needle on “Please Please Me,” becoming the first person to play the Beatles on American radio. Black with rainbow trim, the label on the record misspelled the band’s name as the “Beattles.” The record company’s name—“Vee Jay,” the initials of co-founders Vivian Carter and Jimmy Bracken, a married Black couple who’d set up shop on Chicago’s South Side in the 1950s—appeared up top.

At the time, the Beatles were enjoying a surge of popularity in Britain but remained virtually unknown in the United States. Vee Jay took a chance on the Liverpool quartet, signing them after Capitol Records, the American subsidiary of the Beatles’ British label, EMI Records, declined to do so. (British artists fared poorly in the U.S.—or so the company believed.) Though Capitol eventually stepped forward to claim the Beatles, just as Beatlemania was poised to sweep America in late 1963, Vee Jay deserves credit for introducing the band to the U.S.

I just streamed two Hulu documentaries on the Beatles and recommend that you enjoy them, hopefully as much as I did, or even more!

A  2021 documentary miniseries starring British musician Paul McCartney and producer Rick Rubin. The six-part series features the pair discussing McCartney’s career, from The Beatles and Wings to his time as a solo artist. It was digitally released by Hulu on July 16, 2021.

The Beatles: Eight Days a Week – The Touring Years

A 2016 documentary film directed by Ron Howard about the Beatles’ career during their touring years from 1962 to 1966, from their performances at the Cavern Club in Liverpool to their final concert in San Francisco in 1966.