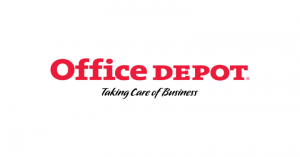 It was recently reported in Naked Security that a Seattle television news crew interviewed an Office Depot employee who alerted them to the practice of selling in-store repair scams to customers who came in looking for computer help.  This whistle-blower told a story where employees where encouraged and even pressured to run the chain’s “PC Health Check” on evey computer brought into the store.  The health check would invariably find “malware” that the store personnel would clean up for about $200.

If this sounds similar to the “fake tech support” phone scams we have reported before, well that’s what it sounds like to me, too.  Seattle’s KIRO7 news team took six computers to a local Office Depot and four of them where found to contain “malware” by store employees.  When these computeers were examined by another professional IT services firm, they where all found to be in flawless operating condition without any malware.

This sounds like another version of overly agressive sales “goals” pushed onto employees at the threat of termination that are reminiscent of the chicanery that was just revealed at Wells Fargo. 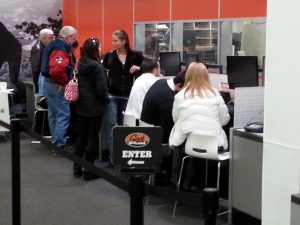 Why would you stand in line to pay too much? When I took this picture, I was escorted out of the store by a blue shirt.

When I had my own computer support business, the entry of big box retailers into the computer support space torqued me off, naturally.  I actually spent some of my time working on systems that had been “optimized” and loaded with crapware and unnecessary software and security products by Best Buy’s Geek Squad and other retailers.  These services are always unnecessary, and merely serve to improve the profitability of the sale for the retailer.

The Geek Squad was founded in Minneapolis by Robert Stephens in 1994, and was actually a pretty good and reliable support group at one time. I actually met Robert Stephens in person at a presentation he made for the Professional Sales Association in Minneapolis around 2000, and he was a great guy.  He was the inspiration for me when I created WyzGuys Computer and Network Support in 2001. The Geek Squad was acquired by Best Buy in 2002, and of course that’s when the wheels fell off the Volkswagon for the Geek Squad.

Are these retail services all 100% scams?  No – but I can assure you that you will spend more money than you would if you took it to a small local IT shop.  The employees of big box retailers are all given incentives to “up-sell” additional products and services, both in the form of cash bonuses and the threat of job loss for failing to reach sales “goals.”

If you need computer service, my recommendation is to work with someone local you have met. Or post a question to your Facebook friends asking for recommendations.  Check with the local Chamber of Commerce.  Or check out Yelp or Angie’s List.  When you find one you like, stick with them.  There are some advantages in having all your support work done by the same person over time, as they willl get to know you and your equipment, and this can save time and money for you, over the long haul.