Mirai and Bashlight Show the Power of IOT Botnets 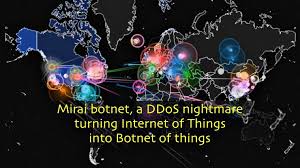 I was tempted to post this article late in October, when Brian Krebs suffered with the DDoS attack on his website, or when the Mirai botnet attack on DynDNS was in full swing, but decided to wait it out until after the election, in case it turns out that the Dyn attack was a precursor to an attack to disrupt the elections.  And as of today, it appears that it was not.

Up to this point, botnets required a collection of hundreds or thousands of infected computers under a command and control server run by the cyber attackers.  What is different about Mirai, and its close cousin Bashlight, is that they are IoT botnets.  That is, they work by infecting devices considered part of the Internet of Things, such as, cameras, routers, DSl and cable modems, wireless access points, DVRs and smart TVs, and other small Internet connected devices.  These devices are usually running some version of the Linux operating system.  Many of these devices are designed with little or no built-in security, and come with default user credentials.  “Admin” and  “password” are common, and lists of default passwords can be found on the Internet.  People who buy these devices often leave the defaults in place, which makes it trivial for an IoT bot-herder to take over these devices.

Rounding up vulnerable IoT devices for these botnets is an automated process, where once a machine is infected, it scans the Internet looking for other devices that are also vulnerable.  The attacking machine often tries the known default user and password for the attacked device, and gets right in without issue.

These botnets contain not hundreds or thousands, but hundreds of thousands of devices, and are capable of delivering an attack bandwidth of 300-600 GB of traffic. These are the largest attacks seen so far. A typical home or business Internet connection, by comparison, is 20-50 MB, or 12,000 times smaller.  For example, if a six-lane highway is detoured to a two-lane road, traffic flow stops.  If someone throws 600 GB of traffic at a server or network designed for 100 MB or 1 GB of throughput, you get the same result, the traffic congestion basically prevents use of the resource.

So what has happened so far?

What can we do about this new threat?

If you are running a web site that is affected by an attack like these, here are a few tips for you, courtesy of WordFence Security.

Billions of these IoT devices will be connected to the Internet before the decade is out.  I am not sure why every new technical advance comes with the same old security issues.  Hey!  Builders, creators, inventors – wake up!  If you build it the bad guys will come too.  Someone wants to hack your dream before you even have it.  Let’s try to keep it from being so easy.