As reported by Symantec on June 30, and covered by the New York Times and SiliconBeat, there is a active exploit running against U.S. and European energy firms using the Dragonfly or Energetic Bear exploit kit.  Similar to Stuxnet, this exploit seeks to gain access and control of the industrial control systems that manage the flow of electricity. oil, and gas.  The article on Symantec is very through and gives a pretty technical readout, as well as the historical background of this exploit.

Their conclusions are disturbing, in that the perceive this to be a state sponsored threat, and that the attackers are based in eastern Europe.  In addition to direct system and network hacking, it appears that the group used phishing emails targeted at senior employees at energy companies.  These emails contained a malicious PDF attachment, and a subject line of “The Account” or  “settlement of delivery problem.”  Opening the attachment would install a remote access Trojan (RAT) which would allow the attacker full access to the compromised computer and allow for the installation of other malware and hacking tools.  This allowed the attackers deeper access into the network of the utility company.  These breaches, and there have been many (see chart below) could allow the sponsoring country to interfere with the delivery of electricity, oil, and gas. 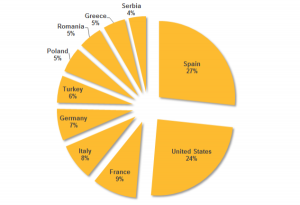