How to Protect Yourself From Gold Scams 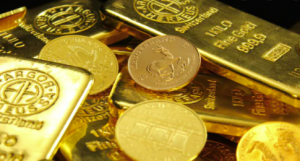 Since the pandemic began, gold scams have been making headlines.

While there are many types of precious metals fraud, here are some representative cases:

While most lockdowns have been lifted, some are being reenacted in other countries, like China. Scammers targeting gold investors continue today.

Indeed, with uncetainty rising due to the Russia-Ukraine war, and inflation running hot, gold prices are rising again (see this). This typically attracts more fraudsters.

How to Spot Common Scam Behaviors

It pays to be aware of the way scammers work their marks. Be on the lookout for these tip-offs.

Those targeted include people the scammers expect to be influenced by their false plight, including women, retirees, and the elderly.

What Law Enforcement Is Doing

Citizens who fall prey to the jewelry-for-cash scam, typically find out the gold is worthless after they take it to a jeweler for appraisal.

Given the widespread availability of “cash for gold” businesses throughout the U.S., there is no credible reason that an honest individual would have to sell their gold to a stranger in order to get “fast cash.”

How Are Gold Scams Connected to the Pandemic?

In the wake of the pandemic, and the trillions in stimulus distributed by the U.S. government and some states, gold has soared in price, beating all major commodities, until it was surpassed by silver.

Gold investment is sometimes called “the fear trade.” This means when investors are concerned that massive ‘money-printing’ by the government will spark runaway inflation, or they believe a stock market crash is on the horizon, they often increase their gold holdings.

The traditional (and contested) view of gold is that it is a “safe haven” asset that will provide some protection against market catastrophes. Silver, which is much cheaper than gold, is also sometimes viewed as a safe haven.

Demand for gold was followed by a supply crunch: the U.S. Mint shut down part of its operations due to the coronavirus. Gold prices surged to a record price of over $2,000 an ounce. Some retailers ran out of silver coins and ran low on gold coins, sparking buying stampedes and more shortages.

Such a trend may include an increase in scams involving sophisticated counterfeit bars and coins targeting retail buyers.

Consider these fake gold bars, fabricated and packaged to look as though they were produced by the Australian government’s Perth Mint.

These counterfeits are so sophisticated that it’s impossible for an average buyer to tell they are fake. The bars even include serial numbers.

Gold scams have a lot in common with other investment, commodity, or property scams. They come in many forms but most will fall into five categories:

Bait and Switch: The fraudster offers to sell the victim gold, but it’s fake. In some cases they also make misleading claims about the value of a gold coin, under the assumption that the buyer can’t or won’t check. A variation of this scam includes sending gold with falsified documentation.

Partial Delivery Scam: These scams rely on building trust. The most common variant has the criminal selling the victim a sample of gold, which is legitimate, in order to create trust. The victim then sends money and either gets a delivery of fake gold or nothing at all.

Selling Gold and Storage Services That Don’t Exist: In this variation, the fraudster has hit the jackpot. They have typically convinced the victim to buy a large quantity of gold, and also convinced them that it is unsafe to store it at their home or office. They then upsell the victim on gold storage services, to keep the coins safe. Neither the gold nor the storage site exist.

The Business Partner Scam: This one will be well known to any deputies familiar with the Nigerian prince scam. Typically, the criminal sends an email claiming that they, or the victim, have an unclaimed inheritance. However, in order to access their inheritance, they need a “small favor.” They ask the victim to send money, promising to pay the victim back once they have the assets, which of course never happens.

Sleight of Hand: In contrast to other scams, these involve physical contact with the victim. Like a magician, the scammer distracts the target, placing an item of gold jewelry on their body while imperceptibly stealing real gold jewelry that the victim was wearing. (See this San Francisco Police Department report for an example.)

Impacting Your Community (and Beyond)

Your knowledge and actions will make it harder for scammers to take advantage of law-abiding citizens. And a vigilant community can be an important partner in helping make sure scammers wind up where they belong: behind bars.

While gold scams can affect people locally, in some scenarios, such as sales of counterfeits produced in another country, your efforts may also have an international impact.