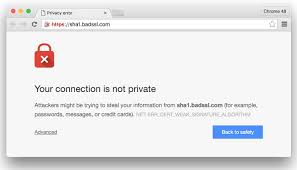 SHA-1 or Secure Hashing Algorithm 1 was developed in 1993 by the National Security Agency (NSA).  It has been used to provide both hashing functions and digital signatures that validate that a certain document, web site, or other resource is genuine, original, and unchanged.

SHA-1 is used in common services such as SSL (secure websites) and TLS (secure email).  There has been discussion about the low security of SHA-1 going back to 2005.  In 2010 the National Institute for Standards and Technology has recommended that government agencies stop using SHA-1.  And in 2014, Google stated it would actively penalize websites still using SHA-1 in SSL certificates after 2016.  The reason is that the hash length is considered too short to be be absolutely secure.  The recommended upgrade path is to SHA-2 or SHA-3.

When I am performing vulnerability assessments for client companies, SHA-1 vulnerabilities show up often.  Upgrading would eliminate those vulnerabilities.  And now we have other reasons to move on from SHA-1 implementations.  Next year, Google, Microsoft, Apple, and Mozilla browsers will no longer accept SHA-1 connections.

If you are using a SHA-1 SSL certificate on your website, you will want to upgrade to something better as soon as possible, or risk running your visitors through the gauntlet of worrisome security warnings, not to mention lower Google page rank.  If you have manually created self-signed security certificates on your Windows computer network, you will need to go through the process of updating those certificates to SHA-2 or 3.