Creator of email dies at age 74 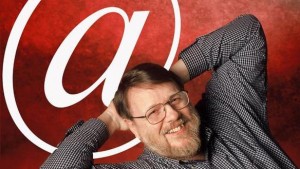 We are to the point now where the men and women who were involved with the beginnings of the Internet are starting to pass away.  Saturday, It was Ray Tomlinson, who invented email.  We was the one who decided to use the @ sign in the email address to separate the user name portion from the domain name portion of the email address.  There is a great article about him on SiliconBeat.

“Before Tomlinson created the first system that allowed for the sending of messages to specific people at a certain address, electronic messages could only be shared with multiple people in a limited way. In the same FAQ from which the quote above was taken — in a page on his employer Bolt Beranek and Newman’s (BBN) site — Tomlinson said he created email “mostly because it seemed like a neat idea,” and because he and his colleagues had been tasked with finding something interesting to do with ARPANET, the computer network for the U.S. government that pre-dated the Internet.

Years ago, Tomlinson told NPR he sent the first test emails by sending messages between two computers in his office whose “keyboards were about 10 feet apart.” He didn’t remember the contents of the first email.”