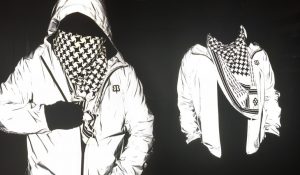 That fifteen minutes of fame that Andy Warhol promised us is getting much longer.  These days we have all become stars of the tiny screen.  The screens I am talking about are the monitors for all the CCTV and surveillance video cameras that are just about everywhere.  Wouldn’t it be great if there was a way to make yourself invisible to these cameras?  Of course, there is.

There is a real thing called “anti-paparazzi clothing.”  Go ahead and Google it.  These garments are something else.  The use highly reflective materials to bounce the light from a camera flash back at the camera.  The way this works is that there is actually a pre-flash that helps the camera determine the right exposure settings.  The reflected pre-flash makes the camera underexpose the picture, so everything is too dark.  Check out the article on TechCrunch.

Another way is to user lasers.  Protesters in Hong Kong were caught on video shining lasers into the surveillance cameras to disable them.  One way to “jam” a camera is with two semiconductor lasers, one red one green.  Ordinary lasers that you might use for a pointing out parts of a slide show, or come on key rings, have a fairly low power output of 1-5 milliwatts.  This can affect a camera’s auto-exposure system, but they are not the best for this purpose.  Higher powered lasers in the 100 milliwatt range will actually damage the imaging sensor chip permanently.  There is a YouTube video that shows how lasers in a rock concert light show fried the camera of the guy hired to record the event.  There is a great article on zapping cameras here, if you want to go deeper into this subject

But there is a better solution that uses infrared LED lights attached to a cap that is invisible to humans and virtually undetectable, but to surveillance cameras, especially those using night vision technology your face turns into a huge glowing orb.  A fun little DIY project for the weekend.  840 nanometer wavelength IR LEDs are a little brighter.  Check it out.

It shouldn’t be too hard to modify this project to put IR lights around your license plate to defeat ALPR (automatic license plate reader) cameras.

An interesting side note, it seems that the LIDAR systems used by self-driving and other automobiles also can damage camera sensors.  These systems also use small lasers rather than radio waves used in radar systems to measure the distance between the car and other objects.  These lasers can damage cameras that are nearby.

There are numerous security threats that companies might encounter, making it difficult to decide which ones to address first...

Well we have made it a year.  Here's some collected humor to help through the anniversary.  ...

When it comes to IP transit solutions, it helps you allow network traffic to cross or transit your network. In case you h...

The title means "disaster of the day."  I came across this chart on Facebook.  Not terribly funny, but I decided to share i...

A quick Saturday digest of cybersecurity news articles from other sources. And the beat goes on. As researches discove...