Be Alert to Carjacking 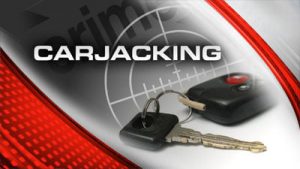 Could you become the victim of a carjacking?  Usually when I am discussing hijacking, it is in the context of email hijacking, web account hijacking, or web server hijacking, but I believe this is important to share in it’s entirety.  This post by the Ramey County (Minnesota) Sherriff’s Department is if of important information about the procedures, tactics, and techniques of carjacking gangs, and what you need to be alert for, and how to respond to possible carjacking situations.

MN CRIME
18 hrs  ·
RAMSEY COUNTY SHERIFF’S OFFICE ISSUES WARNING IN RESPONSE TO INCREASE IN CARJACKINGS
“In the last week, 14 carjackings have been reported to law enforcement in the East Metro area,” said Ramsey County Sheriff Bob Fletcher. “Many of these stolen vehicles have also been used in a series of other crimes, including street robberies and additional auto thefts. This is a serious uptick in a criminal activity that began last summer.”
Suspects typically travel in groups of two or four in stolen vehicles.
When committing a carjacking, suspects split up: one threatens the victim and steals the victim’s car while the other suspect drives the getaway car. This pattern continues for a series of additional carjackings, robberies, and auto thefts. In most cases, suspects use handguns to threaten victims. A shot was fired in the direction of the victims in one case. When suspects are spotted by law enforcement, often driving a stolen vehicle, they frequently choose to flee police in the stolen car instead of pulling over.
SHERIFF FLETCHER REMINDS CITIZENS TO BE ALERT TO THE FOLLOWING TACTICS USED BY CARJACKERS:
– “Blocking” – suspects block the street with a second car preventing the victim from escaping. With the victim’s car blocked, suspects steal the victim’s car and take any valuables, including cell phones, wallets, money, etc. Suspects threaten the victim with a handgun or force.
– “Bump and rob” – suspects in a vehicle cause a minor collision and use it as a distraction. With the victim distracted by the car accident, suspects hope the victim will exit their vehicle to assess the damage. As the victim exits their car, suspects steal the victim’s car and take any valuables. If victims do not leave their vehicles, suspects escalate force to steal the victim’s car.
– “Gas pumps” – suspects drive up to a vehicle while the victim is pumping gas. Suspects then steal the victim’s car and drive off. If necessary, suspects use force.
– “Asking for help” or other “distractions” – suspects ask for directions or help jump starting their vehicle. With the victim willing to help, suspects steal the victim’s car and take any valuables. Suspects use the “distraction” as an opportunity to get close to the victim and their car. Once in victim’s personal space, suspects use force to steal the victim’s car.
– “Warming up” – suspects look for vehicles that are left running unattended and warming up due to the cold weather. Suspects watch for victims to come to their vehicles so the suspects can gain control of car’s key fob. Suspects approach on foot or in a secondary vehicle. Suspects, with force or threat of force, steal the victim’s car and take any valuables.
Recent trends also include suspects asking victims if their cars are trackable. If the vehicle is trackable, suspects rob the victim at gunpoint of their personal belongings (wallet, purse, phone etc.), but do not steal the victim’s vehicle. During some robberies, suspects have compelled victims to unlock their phones. Suspects have also committed multiple robberies and carjackings in one day and on several occasions in the span of a few hours.
Sheriff Fletcher also noted a recent carjacking that took place in Little Canada. On February 8, 2021, the Sheriff’s Office responded to a carjacking. The suspect vehicle pulled in front of the victim’s car at an intersection, blocking the victim from leaving. Four suspects then approached the victim’s vehicle. The suspects pointed guns at the victim and told the victim to exit their car and leave their wallet. The suspects then fled the scene in the suspect vehicle and the victim’s stolen car. “This incident took place in broad daylight, at 2 o’clock in the afternoon, at a busy intersection when temperatures were below zero,” said Sheriff Bob Fletcher.
The Sheriff’s Office, like several law enforcement agencies across the metro, have responded to similar incidents in recent months. “Motor vehicle thefts are also occurring when vehicles are left running and unattended with children inside,” added Sheriff Bob Fletcher. “This is a regional concern as city and county lines are continually crossed by these criminals and the use of violence is increasing.”
East Metro law enforcement agencies have arrested five suspects in the last two days. Additional suspects remain at large and are likely responsible for other crimes, including auto theft and stealing cars that are left running unattended.
PREVENTION
To help prevent carjackings and prevent motor vehicle thefts:
– Stay alert and aware of your surroundings, walking to and from your car.
– Lock your doors and keep your windows up.
– Do not sit in your vehicle for an extended period of time.
– Do not leave your vehicle running untended, especially with children inside.
– Park in a secure, high traffic, and well-lit area.
– Call 9-1-1 if you see anything suspicious or you are concerned for your safety.
Be Sociable, Share!