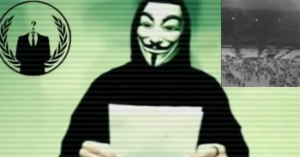 Can we stop calling this terrorism, and call it what it is – warfare!

The day after ISIS claimed responsibility for the acts of war carried out in Paris by trained members of the ISIS military, members of the hacker collective Anonymous declared war on ISIS.

“On Friday 13 November our country France was attacked in Paris for two hours, by multiple terrorist attacks claimed by you, the Islamic State.

These attacks cannot go unpunished. That’s why Anonymous activists from all over the world will hunt you down. Yes you, the vermin who kill innocent victims, we will hunt you down like we did to those who carried out the attacks on Charlie Hebdo.

So get ready for a massive reaction from Anonymous. Know that we will find you and we will never let up. We are going to launch the biggest ever operation against you. Expect very many cyberattacks. War is declared. Prepare yourselves.

Know this: the French people are stronger than you and we will come out of this atrocity even stronger.

Anonymous sends its condolences to the families of the victims.

We are Anonymous. We are legion. We don’t forgive, we don’t forget. Expect us.”

A video was posted to YouTube.  Want to join the battle?  Fire up your TOR browser and check out the last link below.  (Only available through TOR.)

**Update:  I just received information that the Internet has seen more than 15% increase in traffic, most of it DDoS attacks, it is assumed, from Anonymous toward ISIS targets.  They are also reportedly trying to take over financial accounts.